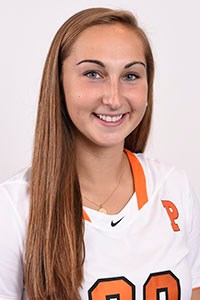 Junior Year (2019): Appeared in 11 games … scored two goals and one assist, while causing one turnover and picking up one ground ball … scored her first career goal in a 21-10 win over Penn State on Feb. 27 … chipped in an assist in win over versus Villanova, while causing a turnover and picking up a ground ball … scored a goal in a 19-7 win over Wagner in the first round of the NCAA Tournament.

Sophomore Year (2018): Played in two games before suffering an injury.

Before Princeton: A three-sport athlete at Huntington High School … played varsity lacrosse, basketball and soccer for five years … captain of all three teams … An injury prevented her from having a complete senior lacrosse season, though she did turn in 10 goals and 29 assists … totaled 304 career points on 126 goals and 178 assists …. named all-league as a freshman in lacrosse while being named Rookie of the Year on her basketball team … as a sophomore was named all-league in soccer, all-county in lacrosse and earned the Suffolk Points Title in lacrosse with 134 points (49g, 85a) … captured all-county honors in both soccer and lacrosse as a junior and was selected as a national all-academic in lacrosse … as a senior she was named all-county in basketball and was ranked by Inside Lacrosse as the No. 16 recruit in the nation … Under Armour All-America … named honorable mention MSG Tri-State lacrosse in 2014 and second-team All-Long Island in 2016 … played club for Team Elevate in 2014 and 2015 … selected twice to the School Girls 2 team and to the Nassau vs. Suffolk team.