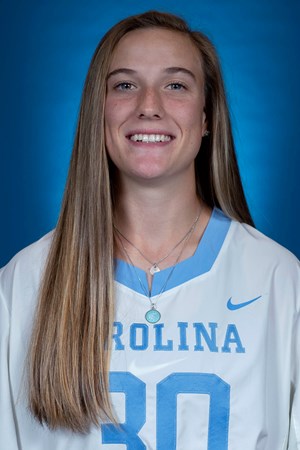 From UNC – GENERAL – Should be one of the nation’s top goalies for a third consecutive season.

SOPHOMORE (2019) – Named second-team All-America by ILWomen and third-team All-America by the IWLCA … A first-team All-ACC pick … Second-team All-South (IWLCA) … One of the top goalies in the ACC and the nation … Had 11 games with double-digit saves in 2019, including all three NCAA Tournament games … Ranked eighth in the nation with a goals-against average of 8.91 and fourth nationally with a save percentage of .532 … Named ACC Defensive Player of the Week on April 15 after holding Syracuse to a season-low five goals and making 12 saves … Limited Duke to a season-low five goals on April 20.

REDSHIRT FRESHMAN (2018) – Was a breakout star for the Tar Heels over the second half of the season … Posted double-digit saves in four of the last five games of the season and five times overall in 2018 … Tied her career high with 17 saves in the NCAA quarterfinal win over Northwestern … Named the ACC Tournament MVP and to the All-ACC Tournament Team after setting a tournament record with 33 saves in three UNC wins, including 11 in the championship game win over previously unbeaten and second-ranked Boston College … Tied her career high with 17 saves in the ACC Tournament semifinal win over No. 12 Virginia Tech … Won the starting job in goal early in the season before suffering a knee injury on March 17 at Northwestern and missing five games … Returned to action on April 15 vs. Canisius … Named ACC Defensive Player of the Week on March 12 after making 17 saves in a win at Virginia … Played the final 48:29 of UNC’s overtime win over top-ranked Maryland in February, making seven saves and allowing just eight goals … Held the Terrapins scoreless for the final 9:25 of the game … Redshirted the 2017 season due to a knee injury.

HIGH SCHOOL – An Under Armour All-America choice in 2016 at Huntington High School in Huntington, N.Y. at goalie … Won championships at the Brine Nationals in 2013 and 2014 … ILWomen listed Moreno as the No. 21 incoming freshman in the nation for 2017 and the No. 2 freshman goalie … Second-team all-state twice in New York … Earned more than 10 varsity letters in lacrosse, soccer, basketball, track and football … Was the first girl in Huntington HS history to play on the varsity football team (at kicker) … A first-degree black belt in Tae Kwon Do.